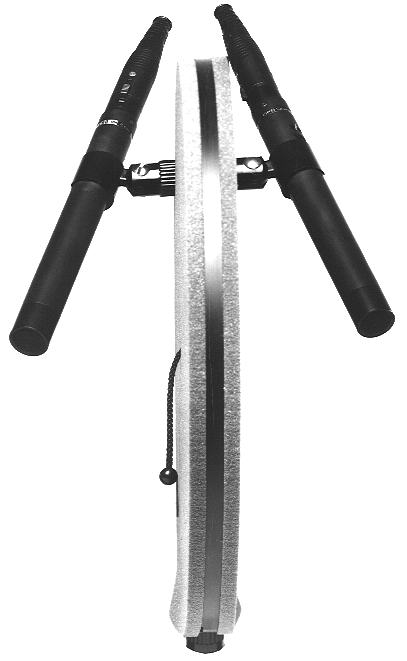 Photo of a Jecklin-type disk made by MB Electronics in the mid 1980s. The central plate is about 8 mm (a little less than 3/8") thick, covered on both sides with 8 mm thick foam. The foam is probably too thin; there is still too much high frequency energy reflected from the disk. The Jecklin-type disks supplied by Josephson Engineering since about 1995 use 25 mm foam. Jecklin is shown in his book with a disk of the same diameter but covered with lamb’s fleece. The NHK (Japanese national broadcasting) version of the disk extends this covering to include the circumference of the disk as well.

The following text is reproduced from Jürg Jecklin’s 1980's paper Microfon Aufnahme Systeme. Note that Mr. Jecklin's suggestions and dimensions have changed a bit over the years. As of 2009 he was teaching at the Universität für Musik und Darstellende Kunst Wien (the Vienna University of Music and Performing Arts) and has published an excellent paper on microphones that contains updated details on the "OSS-Scheibe" aka "Jecklin Disk."

The idea of a new microphone arrangement is the result of the dissatisfaction about the sound of usual music recordings, which has made itself felt during the course of approximately 4000 recording sessions. Almost any sound engineer knows how it feels when the recording does not sound like he imagines it should, despite the use of a lot of microphones. In such a case, i.e., if the technical expenditure cannot be increased meaningfully, one should start again and look for a new recording concept. The present recording technique of electronic music has grown out of the basic arrangement of two microphones (stereophonics). Since the recordings with only two microphones normally are not satisfactory, additional supporting microphones — often a large number of them — are used. Therefore, the solution of the problems has to start with the two insufficient main microphones. On the one hand, the stereo main microphone arrangement must guarantee an optimum sound; and, on the other hand, it must provide the correct stereo signal for reproduction via two loudspeakers in the room. The procedure for the conception of the OSS technique was therefore as follows:

I. Selection of suitable microphones

Practical experience has shown that condenser sound pressure microphones (omnidirectional characteristic) are superior to all other microphones. Even the sound balance and the spatial sound distribution of very large and complex orchestras (symohony orchestras) are correctly reproduced. This kind of microphone is therefore used for the OSS arrangement.

In the usual stereo recording, mainly intensity differences between the two channel are used as directional information. This so-called intensity stereophonics, however, is a mere simulation method with phantom sound sources between the two reproduction loudspeakers, which do not actually “stand” in the room as one would desire. When one listens directly, there are differences in delay time, frequency response and intensity between the two ears of the listener and their combination provides the directional informtion. These three parameters change with frequency and the angel of impact of the sound on the head. In the case of intensity stererophonics, only one of these three parameters is taken into consideration whereas an optimum stereo signal must include all three in the right combination. In the case of the OSS arrangement, all three parameters are used for the directional information and this in a combination which is ideal for the listener when reproduction comes from two loudspeakers in the usual arrangement.

B. Stucture of the OSS arrangement (Jecklin disc)

I. Characteristics of the OSS arrangement

The stereo signal is produced by purely acoustic mixing: on the recording side by the arrangement, and on the reproducing side by the interplay of the two loudspeaker and the reproduction room. The two microphones react only to the sound pressure. The entire acoustic pattern is recorded in one single spot in the room. The result of these clear acoustic conditions is a natural sound and a real spatial acoustic pattern. The simultaneous reproduction of the spatial sound distribution by the two loudspeakers cannot be achieved by any other recording technique. This is audible especially in the case of organ recordings. In the case of orchestra recordings, each instrument can be heard in the place where it is actually played. If the orchestra is arranged correctly, no supporting microphones are required.

The technical expenditure is small. Good recordings can be achieved even with simple technology. The two microphones together emit one stereo signal. They must therefore be adjusted to the same output level in the diffuse sound field. Level differences during recording must not be balanced out. In the case of one-sided recording, the OSS arrangement or the arrangement of the orchestra must be changed.

Sound control at the mixing desk is not possible in the conventional sense. The sound control is moved into the studio or into the hall (changing of the orchestra arrangment). Supporting microphones may be used, provided they are admixed with a time lag that corresponds to the delay time of the sound from the supported instrument to the main microphone. For this recording technique, not only the intensity relationship but also the delay time relationship must be correct.

III. Recording in very reverberant or in acoustically problematic rooms.

In an OSS arrangement, directional microphones cannot be used. When recording in acoustically unfavorable rooms, it is better to accept the room as it is than to fight its acoustics. In practice, natural recording always sounds better than unnatural, so-called improved recording. In any room where it is still possible for musicians to make music, OSS recording is also normally possible.

IV. Range of application of the OSS technique

For the recording of orchestras that are harmonious and are arranged correctly (symphony orchestra, chorus, brass band, chamber music, individual instruments, etc.).

The disc has two microphone mounts (21mm) and one stand connecting piece. By putting the stand connecting piece into the individual borings, the setting angle of the disc can be adjusted to any situation. The measuring cord located in the center of the disc serves for the adjustment of the microphones on the disc. The measuring cord can be adjusted on both sides.

2. Mounting of the microphones onto the Jecklin disc

The microphones are pushed from the rear through the holding clamps of the Jecklin disc. Take care that the microphone capsules on both sides are located at a distance of approx 8 cm directly above the disc center. This can be checked by means of the pulled-in measuring cord. In this case, the angles of the microphones are drawn slightly towards the outside.

3. Mounting of the connecting piece

The Jecklin disc with the microphones is at first held by hand in the position that is required for the recording. By loosening the fastening screws at the stand intermediate piece, the intermediate piece can be removed and set into any of the borings at the disc rim; i.e., the disc is attached at the preselected angle. Thus the balance of the entire arrangement is guaranteed and the adjustment to any situation is made possible.

Note from David Josephson: It isn't mentioned by Jecklin, but “the position that is required by the recording” is determined by the desired tone color balance. Most microphones are more sensitive toward the front than toward the sides and rear for high frequency sounds. Rotating the disc maintains the capsules at the correct distance from the disc but allows their angle to the sound to be adjusted for more or less high frequency information.

III. Recording with the Jecklin disc

Since the two microphones together emit a uniform stereo signal, they have to be adjusted prior to the recording in the diffuse sound field to the same output level. This can be checked best by means of a headphone: the spatial impression must be uniform. The room must not “hang” on one side. During the microphone test or the recording, level differences between the two channels must not be balanced out. In the case of one-sidedness, the disc must be turned or rearranged accordingly. A sound control in the conventional sense, balancing at the mixing desk, is not possible; i.e., the sound control is moved from the control room into the studio or concert hall.

Successful recording depends on the perfect functioning of all of the technical equipment used. In practice, this can be achieved most easily be means of the following check list.

During the microphone test:
During the recording:


This article may be reproduced in its entirety, along with this notice. Josephson Engineering, Inc., Santa Cruz, CA.

Thanks to Joel Conrad for typing in the original text and to Jon Singer for editing and proofreading.